Hello, my friends! Do you remember my Pineapple Strawberry banana smoothie I shared recently? Well, I made a lot and I had some leftover and I didn’t want to throw it away so I made these fun fruit smoothie popsicles =D.

Let me tell you this: IT WAS YUMMMMY!!!

With summer here and all this hot weather, there is nothing better than some delicious and refreshing popsicles!

In winter of year 1905, Frank Epperson from San Francisco, then 11 years old left his cup containing water, soda, and stirring stick on his porch. The mixture froze overnight. This was the birth of the world famous summer treat!

Eighteen years later, Epperson introduced his “Epsicle.” His kids called the treat “Pop’s ‘sicle.” And so he changed the name to “Popsicle.” Today, billions of popsicles are sold each year!

Some facts about Smoothies?

In 1930, when Steve Poplawski invented the blender, the “term” smoothie was first used to refer to a beverage in the United States. Smoothies back then were just a mixture of ice, fruits, and fruit juice. They were merely an ambiguous idea in the US until then.

Early smoothies were simply fruit, fruit juice and ice. They were an obscure concept in the United States until people in the ’60s and ’70s got very interested in natural food. During these times, health food stores selling fruit drinks sprang up like mushrooms!

Today, we all love smoothies so much!

This is the easiest recipe ever LOL and kids loooove it, smoothie popsicles are so tasty. My brother almost didn’t let my girl taste it LOL.

Following the same instructions for my smoothie:

How to make Smoothie Popsicles:

In a blender mix all the ingredients until ice is completely crushed. It might be tricky because of the lack of liquids but it will mix.

Pour the smoothie into the popsicle molds and put in the fridge for about 2 hours or more.

That’s all there is to it… 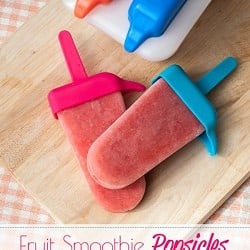 I made a lot of Pineapple Strawberry banana smoothie, I had some leftover that I didn’t want to throw it away so I made these fun fruit smoothie popsicles!

It couldn’t be simpler than that, right???? What do you think???

➺ 16 Yummy Pineapple Recipes {The Weekly Round Up}